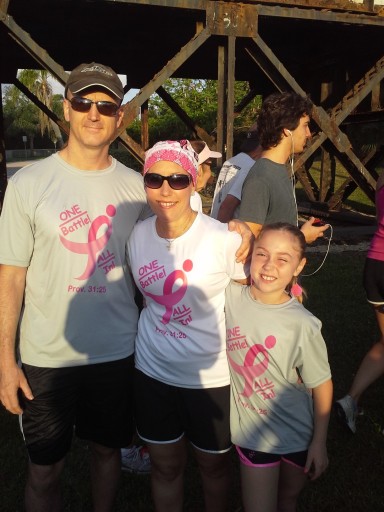 I started writing this post six weeks ago, during a weekend in which we celebrated Gracie’s 11th birthday.  Hard to believe she’s only about an inch shy of being as tall as her mother.  Guess I should finish this post.  Anyway, an update on things…

Gracie’s mom and my wife, Kristine, was diagnosed with breast cancer in December.  After her mastectomy and reconstruction, Kristine’s cancer was initially determined to be Stage IIIb, which meant her 5-yr survival rate would have been less than 50%.  Then a week later the doctors tell us they took another look at the pathology report and downgraded her cancer to Stage 1a.  Her 5-yr survival rate is now better than 88%.  We’ll take those odds…

Kristine is a warrior.  I am in awe of how she has handled things.  She sets an example of how one should face being put in a situation such as she has been.  Today she participated in Melbourne’s Flamingo 5k.  My thanks to all her friends from Bethany Christian School and Kathi from Gabkat Fitness who participated in the event.  Go Team Kristine!  Gabrielle, Gracie’s sister, and I were also there to participate.  Unfortunately, Gracie and my mother, both of whom were going to participate, were unable to do so.  Gracie was ill, so my mom ended up staying home with her.  I was looking forward to pushing Gracie up over the Melbourne Causeway!

As for doing the stem cell therapy this summer for Gracie, it’s not looking like that will be within our reach this year.  My fundraising efforts have completely stalled out.  Mostly because I stopped trying.  I was on the verge of giving up and taking the blog down, but a friend of mine convinced me to do otherwise.  So I will be resuming my efforts.  We’re planning on moving forward with the treatment next summer, even if we pay for most of the costs on our own.  So if you wish to help, please tell your friends and family about Gracie’s blog and ask them to donate a few dollars.  This treatment is the only real hope I personally have of Gracie getting better.

Finally, a comment about a statement a particular autism advocacy organization makes.  This organization states that autism is treatable.  It is statements like this that bother me.  We’ve been ‘treating’ Gracie’s autism for eight years now, with nary a sign of progress.  Cancer is treatable.  It is possible to recover from cancer.  You don’t treat autism, you only live with it, try to manage it in the best way possible.  Hopefully, stem cell therapy can change that, even if only marginally.  If it doesn’t, then I will know at least we tried our best.

Father of Gracie, who is autistic, and her sister Gabrielle (who is a typical). Sharing our stories in Gracieland.
View all posts by graciesautism →
This entry was posted in Issues and tagged Autism blog, Breast cancer survivor, Flamingo 5k, managing autism, reating autism, Stem cell therapy, Stem cell therapy fundraiser, Team Kristine. Bookmark the permalink.